Returning to the Office will be the Toughest for These Companies

The pandemic has thrust work-from-home into mainstream culture and has had an enormous impact on where people choose to live. Now that companies are looking to bring staff back into the offices, it might prove more difficult than they had once thought.

The pandemic has thrust work-from-home into mainstream culture and has had an enormous impact on where people choose to live. Now that companies are looking to bring staff back into the offices, it might prove more difficult than they had once thought. 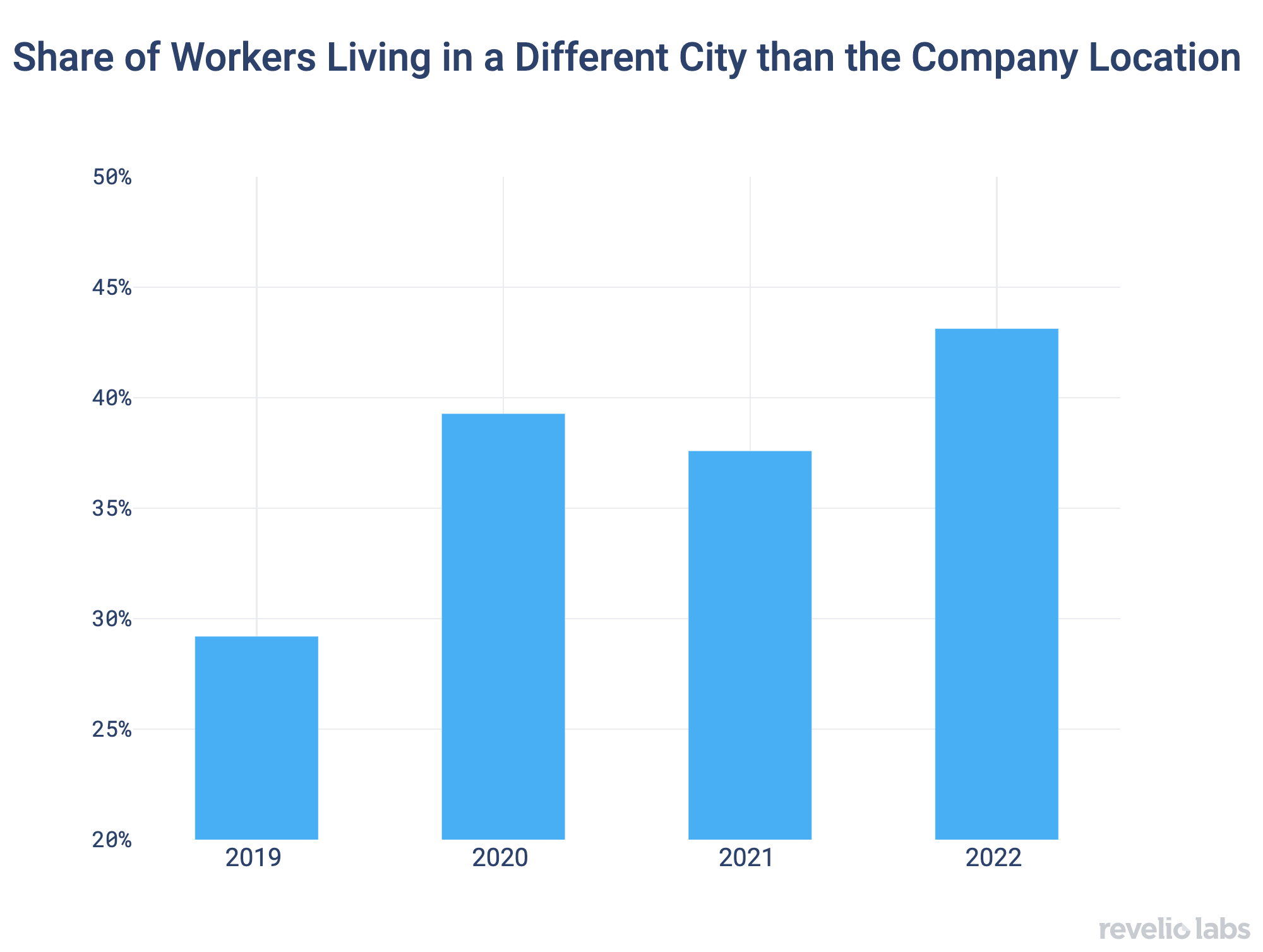 The figure above shows the share of workers residing in a city other than their company’s location. Interestingly, 2021 showed a bit of a reversal in the work-from-home trend, with the percentage of decentralized workers decreasing slightly. In 2022, however, we see that remote work may be here to stay, with over 40% of workers residing in a different city or working remotely.

The Glassdoor reviews also depict a similar picture. We see a considerable increase in mentions of remote work beginning in 2020, followed by a brief reversal of this trend in late 2020. However, they appear to increase sharply in late 2021 and early 2022, with no signs of slowing down. 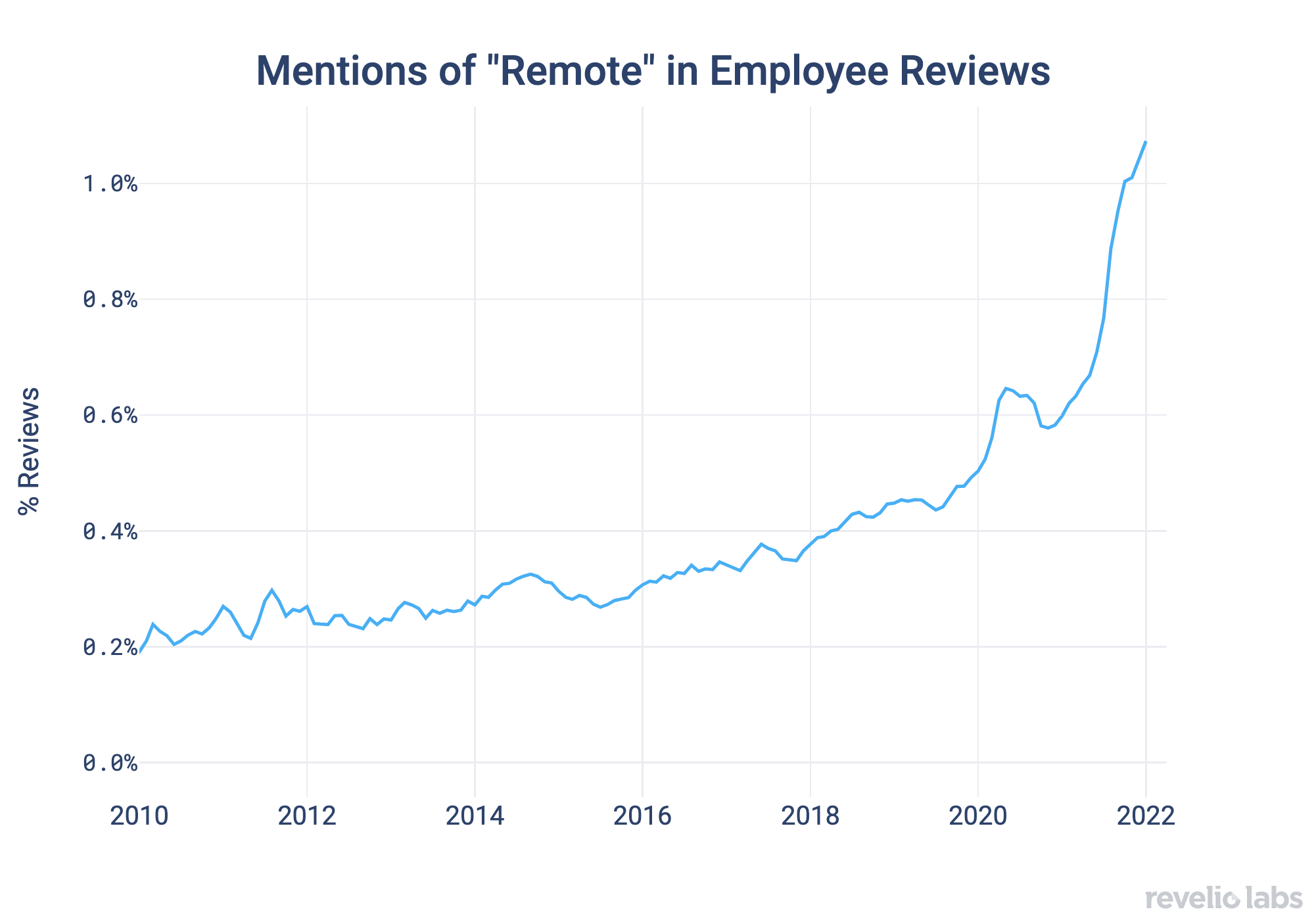 The extent of decentralization depends greatly on the characteristics of a given industry. The graph below depicts the changes in the average distance between workers and their companies by industry. Staffing and Recruiting had the most notable increase, closely followed by Insurance and Marketing. On the other end of the spectrum, we have industries requiring employees to be in person, such as Sports, Music, and Museums. 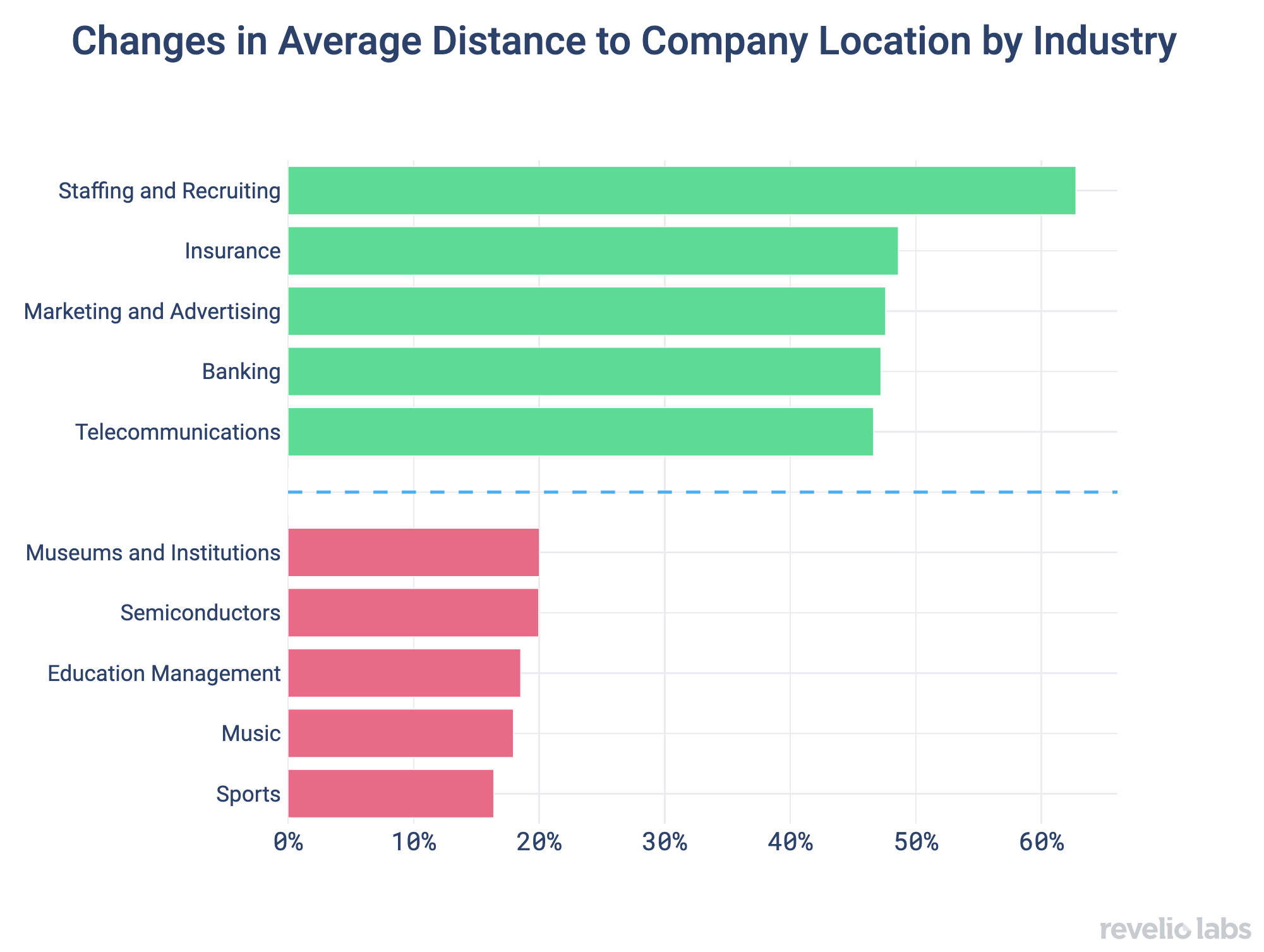 While Apple and Microsoft recently announced plans to call their employees back to offices in a hybrid fashion, a return to the office will likely prove difficult as working from home continues to solidify as a cultural norm. Their workforce dispersion is among the highest, only rivaled by a handful of companies. 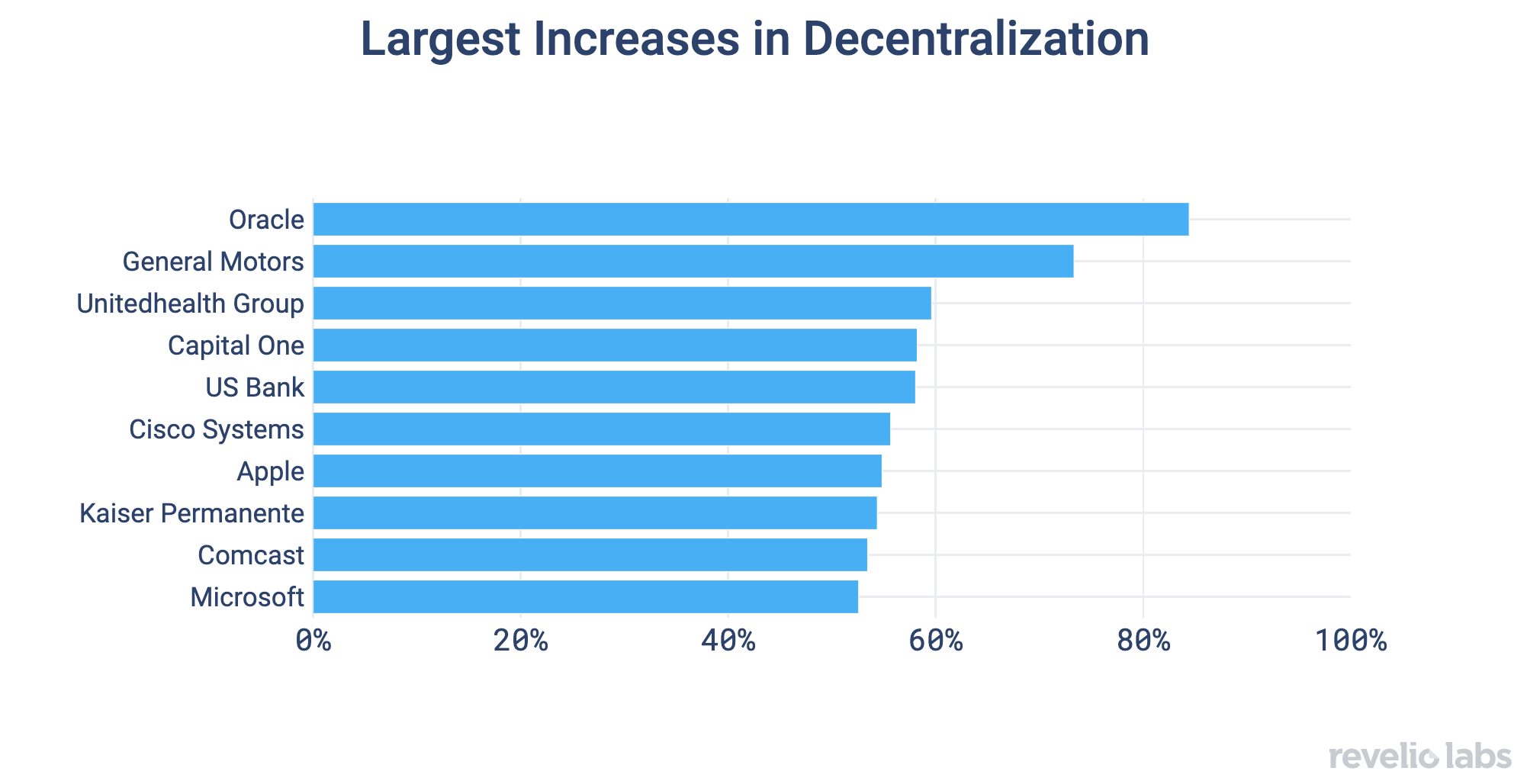 Unsurprisingly, the shift towards decentralization was the most significant where rents were higher. The graph below shows the difference in average worker distance to their workplace for 2019 and 2022. The areas that underwent the most decentralization included the Bay Area in California and Seattle, the headquarters of Apple and Microsoft, respectively. Going back to the office means having to move back to these high rent locations, and lose a significant portion of income. Washington, DC, Portland, Seattle, and Boston also are the other cities with the most significant shifts. 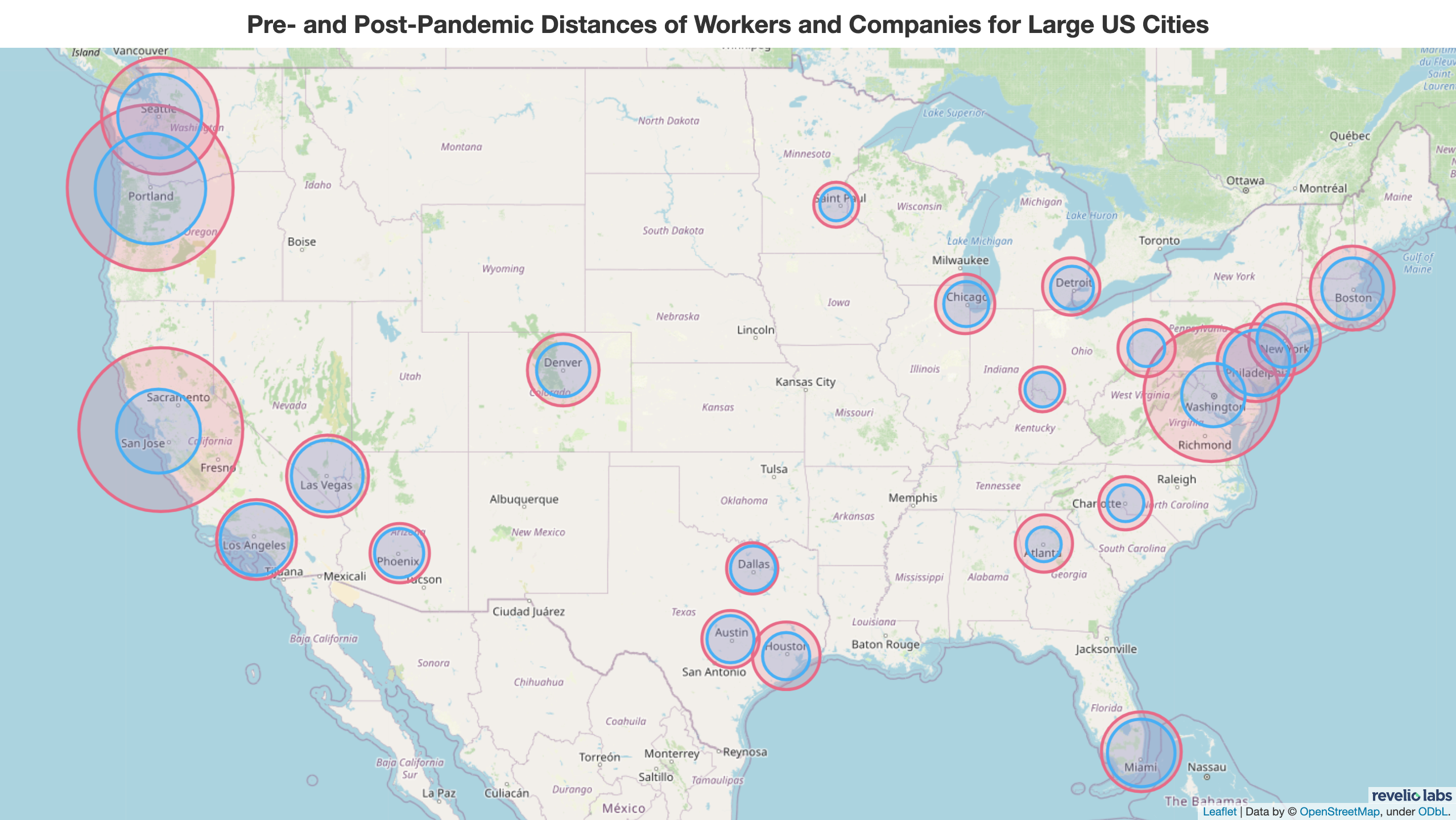