For Employee Retention, "Workiversaries" are Key

A recent WSJ article hailed the 90-day rule for employee retention: if you can keep a worker through the first three months in a job, you will be able to keep them for the long-term. But is 90 days the only crucial threshold for getting a worker to stay or are there other important milestones for retaining talent long-term?

To answer this question, we analyze the attrition risk of workers: at any given job tenure, how likely is a worker to leave the company? 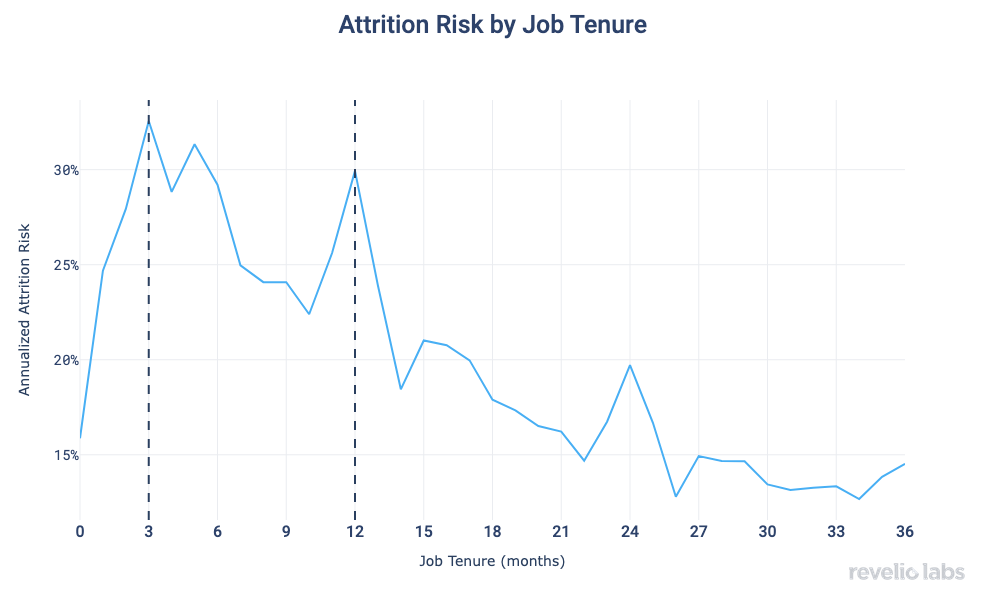 Attrition is highest at the three month mark, and it remains high after passing that threshold.  There is another spike in workers leaving at twelve months of job tenure, but it significantly declines after that.

Even though attrition peaks at three months of job tenure, twelve months is a more important juncture for long-term retention. When an employee crosses the twelve month threshold, the probability that they leave within the subsequent year drops significantly to just 20%, a 29% reduction in the risk of losing a worker.

One final reason to focus on reducing attrition at the twelve month mark is that workers who  consider leaving at twelve months might be higher performing than those who leave at three months. Those who leave after twelve months are more likely to be leaving for a more senior position at another company than workers who leave after just three months. Fast-tracking high performing workers for promotions in advance of their one-year work anniversary could potentially prevent them from leaving the company for a more senior role elsewhere.

Social
Here is Another Gender Gap You Didn’t Know About

Actions speak louder than adjectives in your professional bio.