Pay transparency laws have become an increasingly popular tool to battle pay discrimination like the gender pay gap. Colorado implemented a policy requiring disclosure of salary ranges in job postings under the “Equal Pay for Equal Work” Act on January 1st, 2021. Other places, notably New York City, whose pay transparency policy was to be enacted starting on May 15th, 2022 but was postponed to November following pushback from businesses, are following suit.

This week, Revelio Labs and LinkUp are working together to analyze the impact of Colorado’s pay transparency law using our joint data offering of company job listings, as well as workforce dynamics and employee sentiment. We wanted to know whether the policy increased transparency and whether it had any adverse effects.

First, we wanted to understand the extent of compliance with the policy. By comparing job postings in Colorado with other states (the ones without any pay transparency law), we see the share of posts with salary ranges jump up by 200% between December 2020 and January 2021, with steady increases afterward. In states without the policy, we also see a mild increase in salaries in postings, but nowhere near as high. 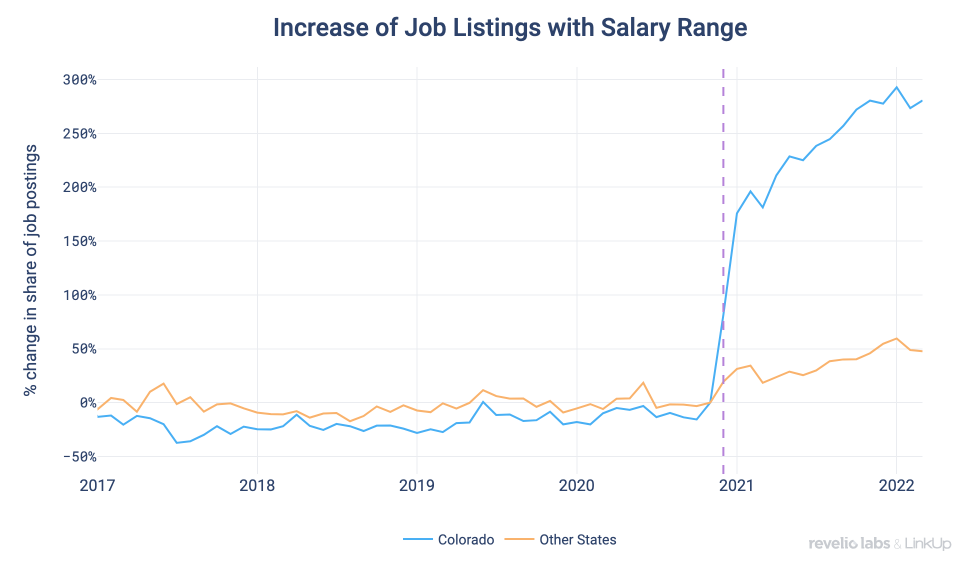 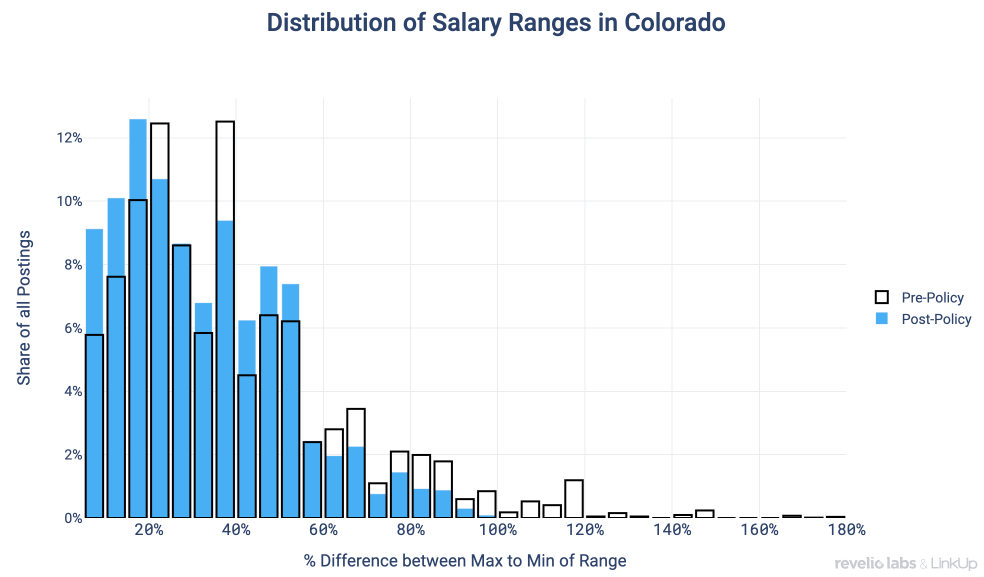 Another question we had was whether companies would avoid posting jobs in Colorado if they feel that disclosing the salary range lowers their informational advantage and decreases bargaining power. By comparing changes in posting volumes in Colorado and other states compared to December 2020, we see that on average, employers have not been systematically avoiding posting jobs in Colorado. 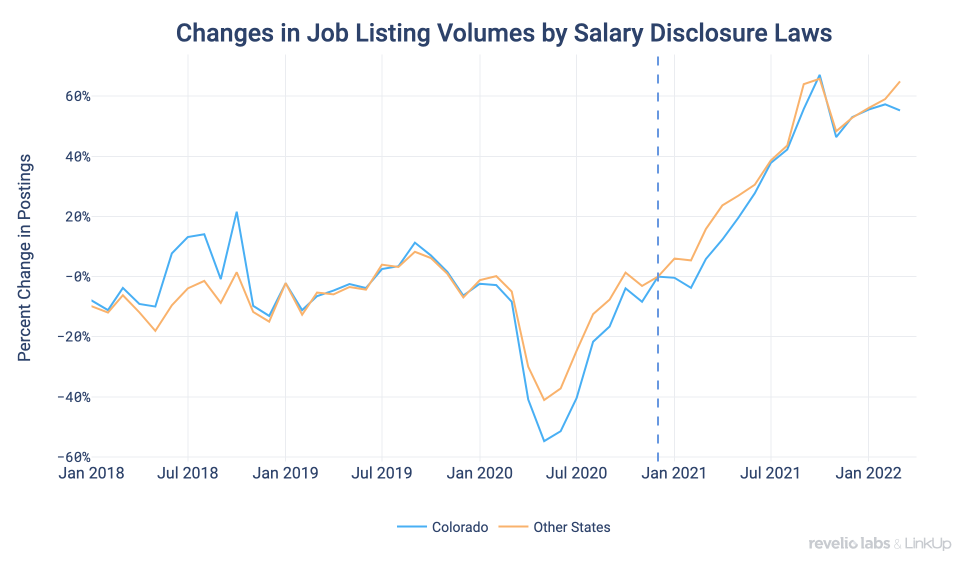 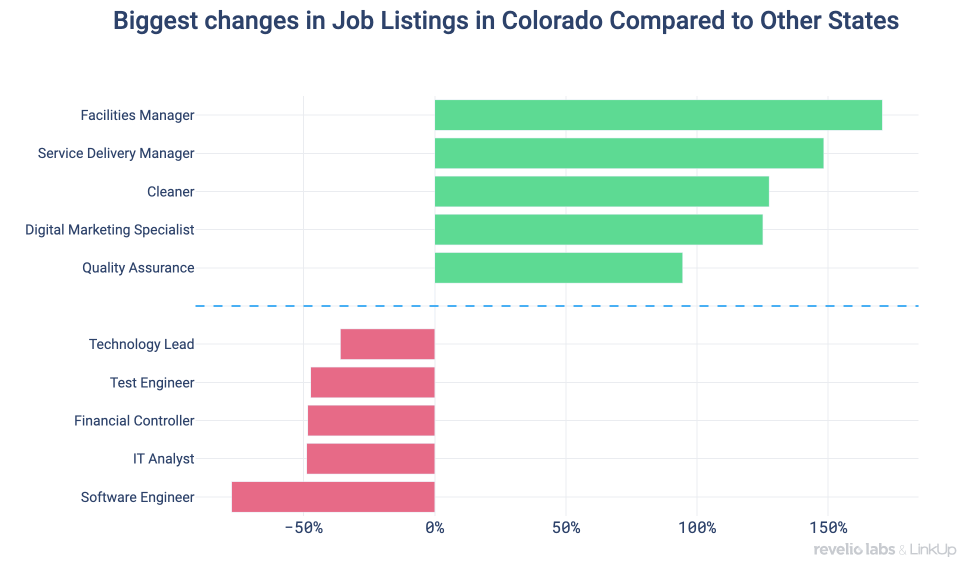 The roles with the greatest relative decreases are tech-related roles like Software Engineers and IT Analysts. Software Engineers saw an 80 percentage point higher decrease in job postings after the policy was introduced, compared to other states. 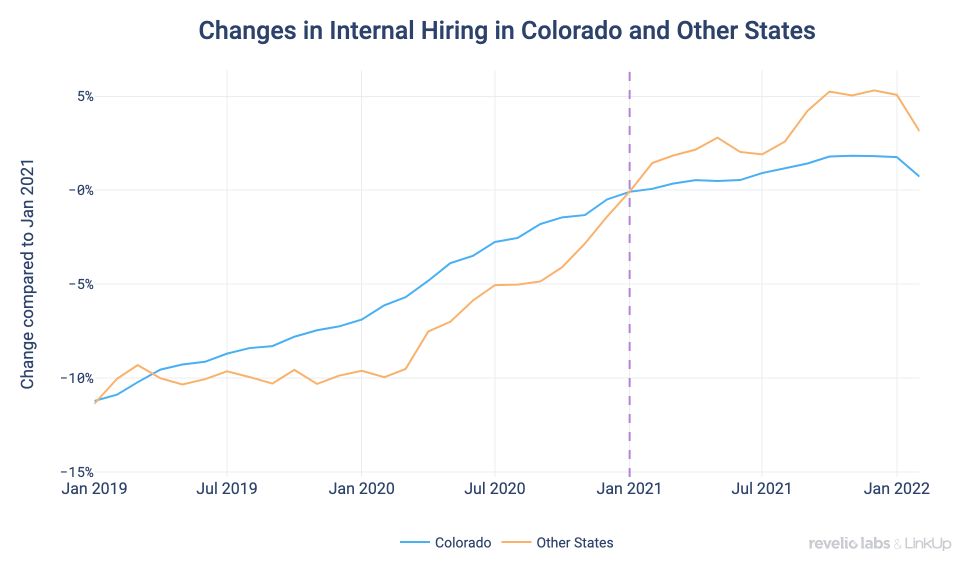 Lastly, while Colorado employees on average always had higher satisfaction rates with compensation and benefits, the new law also does not appear to have changed that. The policy, in conjunction with the pandemic, has decreased satisfaction compared to January 2021. 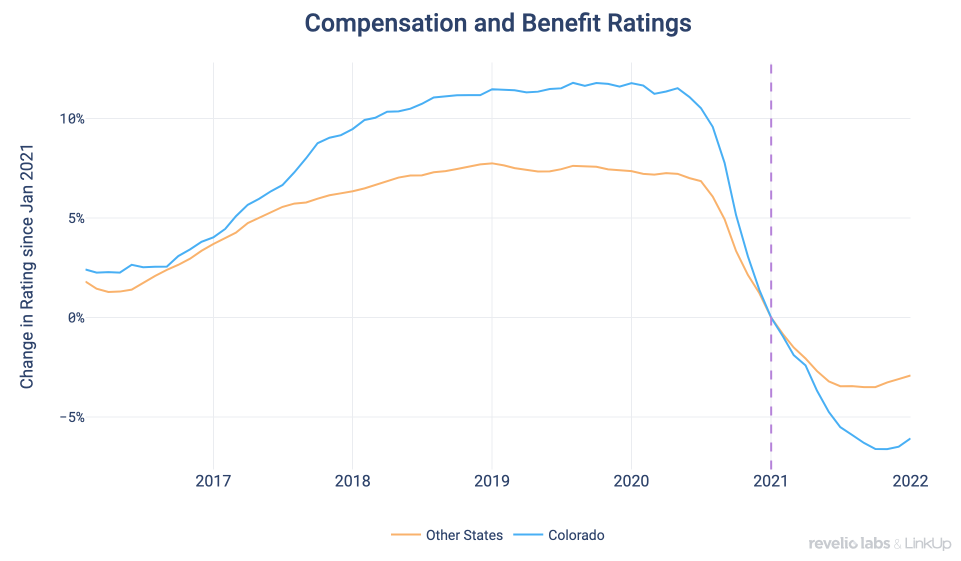 One reason for this may be that existing employees in Colorado see what new colleagues can make, or what they could be making, and become less satisfied with their own earnings. That said, it looks like the decrease is only transient, and on an upward trend again.

In conclusion, the policy reached its goal of increasing pay transparency, without major detrimental effects on labor demand in Colorado. The big open question remains: Does pay transparency actually help to achieve its real goal and decrease pay discrimination like gender pay gaps? While it is still a little early to tell, we will be sure to investigate!