Data from a prominent freelancing platform shows that new account creation has surged in the last year, coinciding exactly with the large increase in attrition rates that we saw during the Great Resignation.

Digital freelance platforms have been promising to revolutionize labor markets for years by enabling anyone to offer their talent flexibly. The promise seems to finally be coming true: Data from a leading freelancing platform shows that the number of new freelance accounts skyrocketed in the last year, as millions of employees were quitting and changing jobs during the Great Resignation. 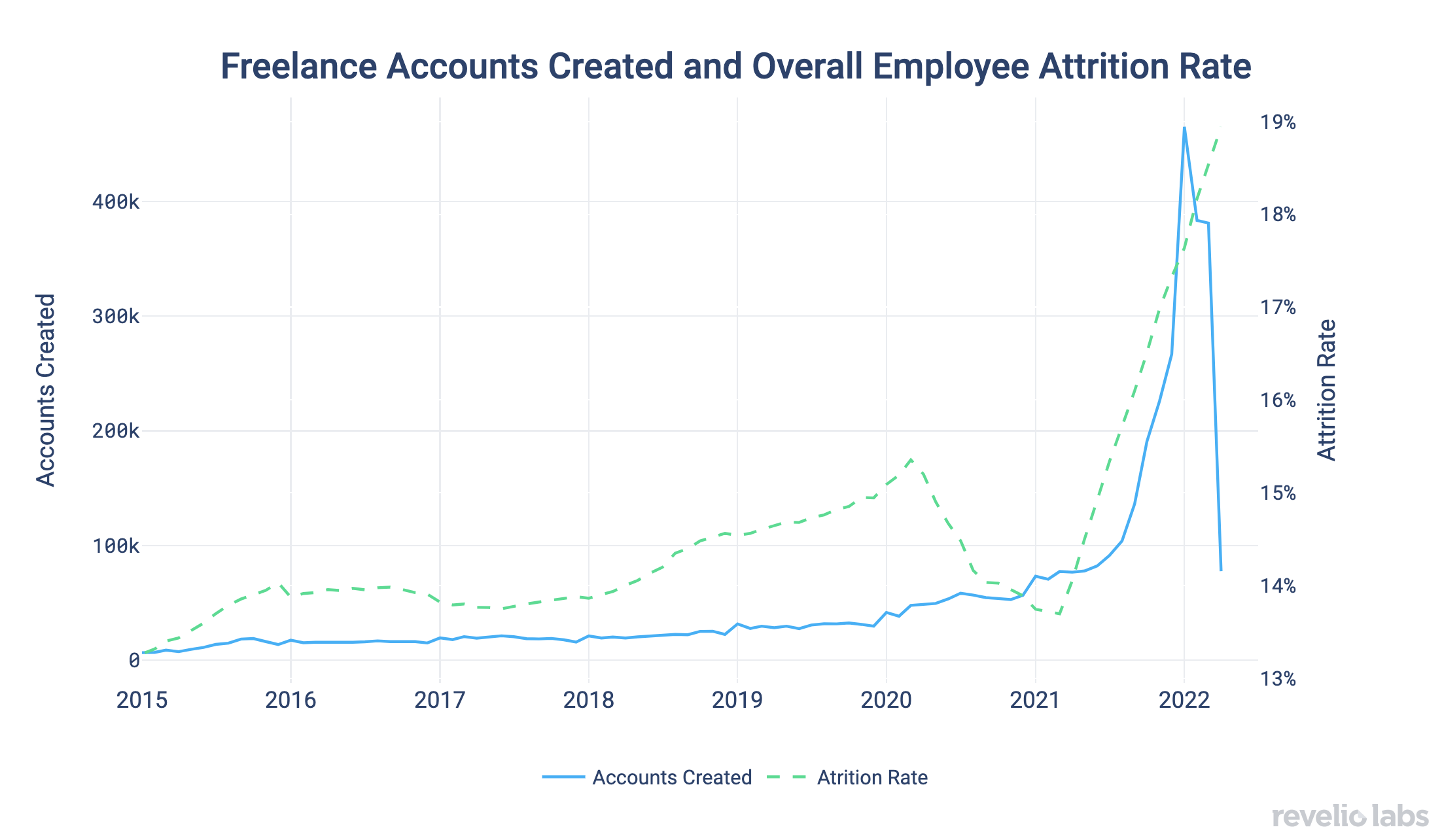 The joint increase in attrition rates and interest in freelancing suggests that many employees were planning to fall back on gig work while changing jobs. However, creating an account is the easy part -- landing jobs and building a reputation are much harder.

While the majority of existing freelance accounts never end up performing jobs, the number of active freelancers has increased sixfold since 2015. The increase in the supply of freelance talent has come with a steep decline in (nominal!) average hourly wages, which are only now starting to recover. 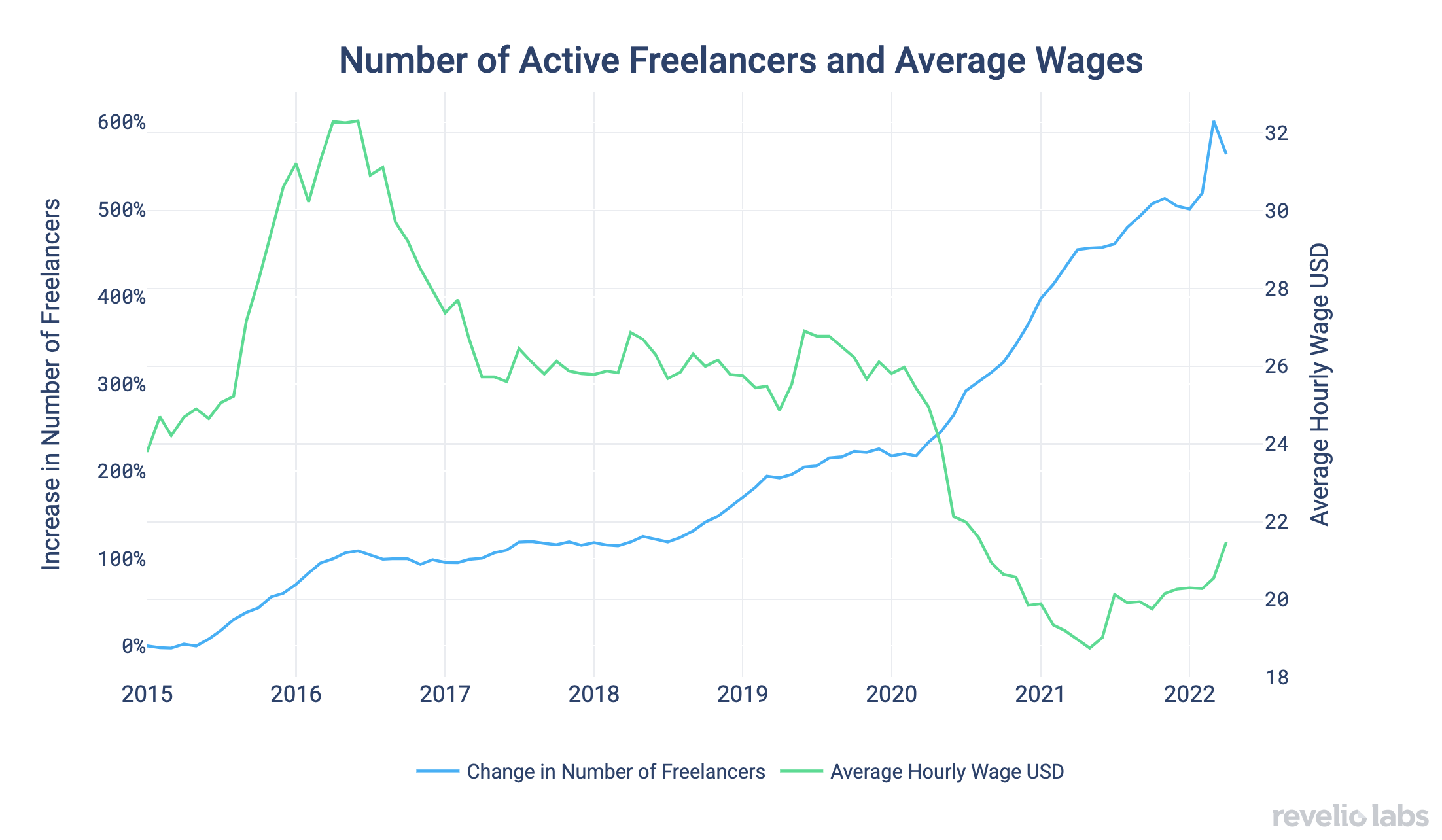 Gig work platforms are available globally, and anyone in the world can offer their services. The steep decline in average hourly wages suggests that more international freelancers from countries with lower wages have joined the platform. Though the majority of freelancers have originated from outside the US to begin with, the share hiked further up in 2021. 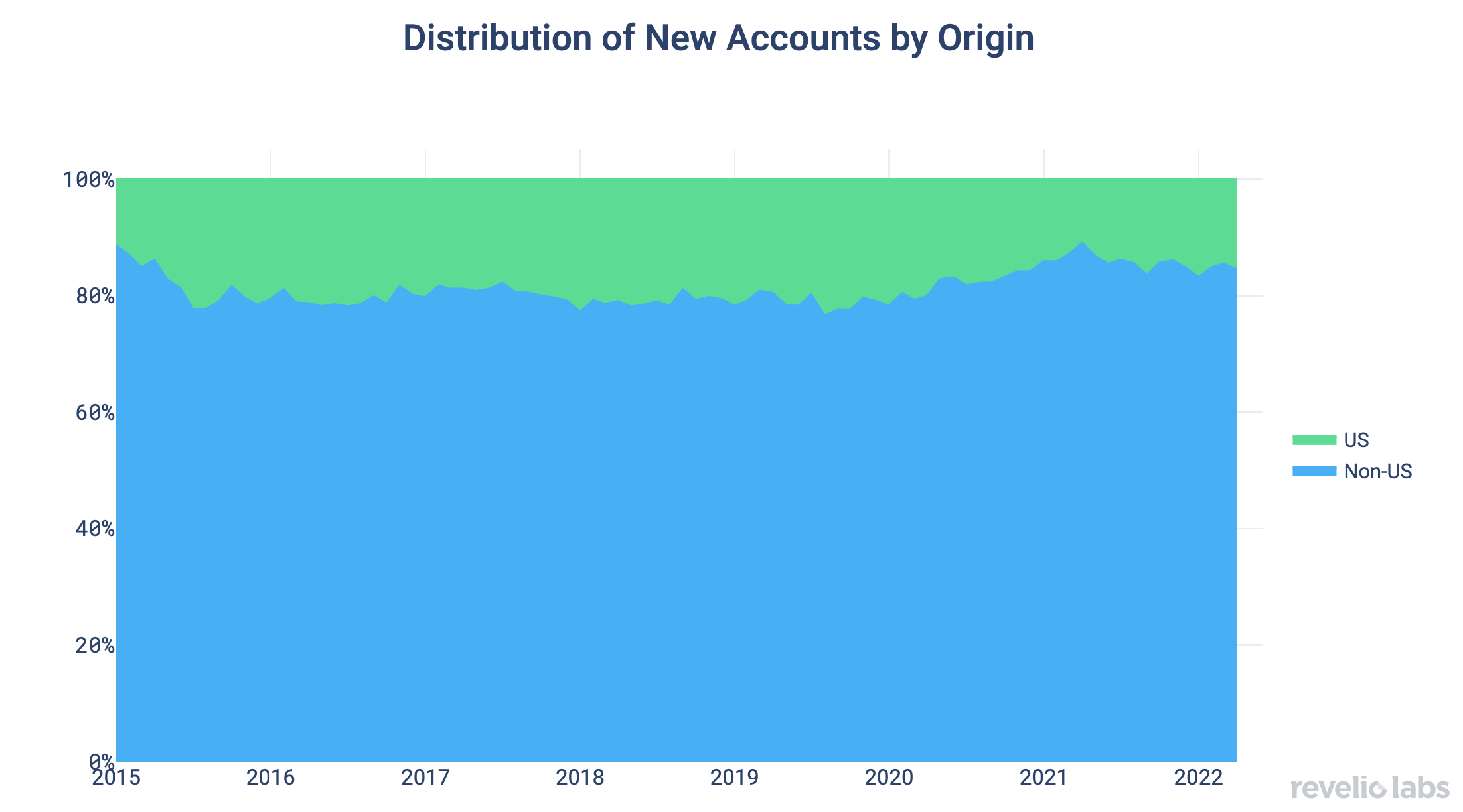 If employees who created their account during the Great Resignation were planning to fall back on gig work, they would have to offer their services at quite a discount compared to their full-time wage. How much of a discount depends on the type of job.

Comparing hourly freelance fees to hourly wage equivalents of junior and intermediate-level employees in the same role, we can see that data analytics and software development have by far the largest relative discounts. These are jobs that can generally be performed independently and fully remote.

On the other hand, jobs like accounting and consulting require strong institutional knowledge and language skills, which may be why there is no freelance discount. Of course, the true cost of labor to employers is higher than just wages paid. 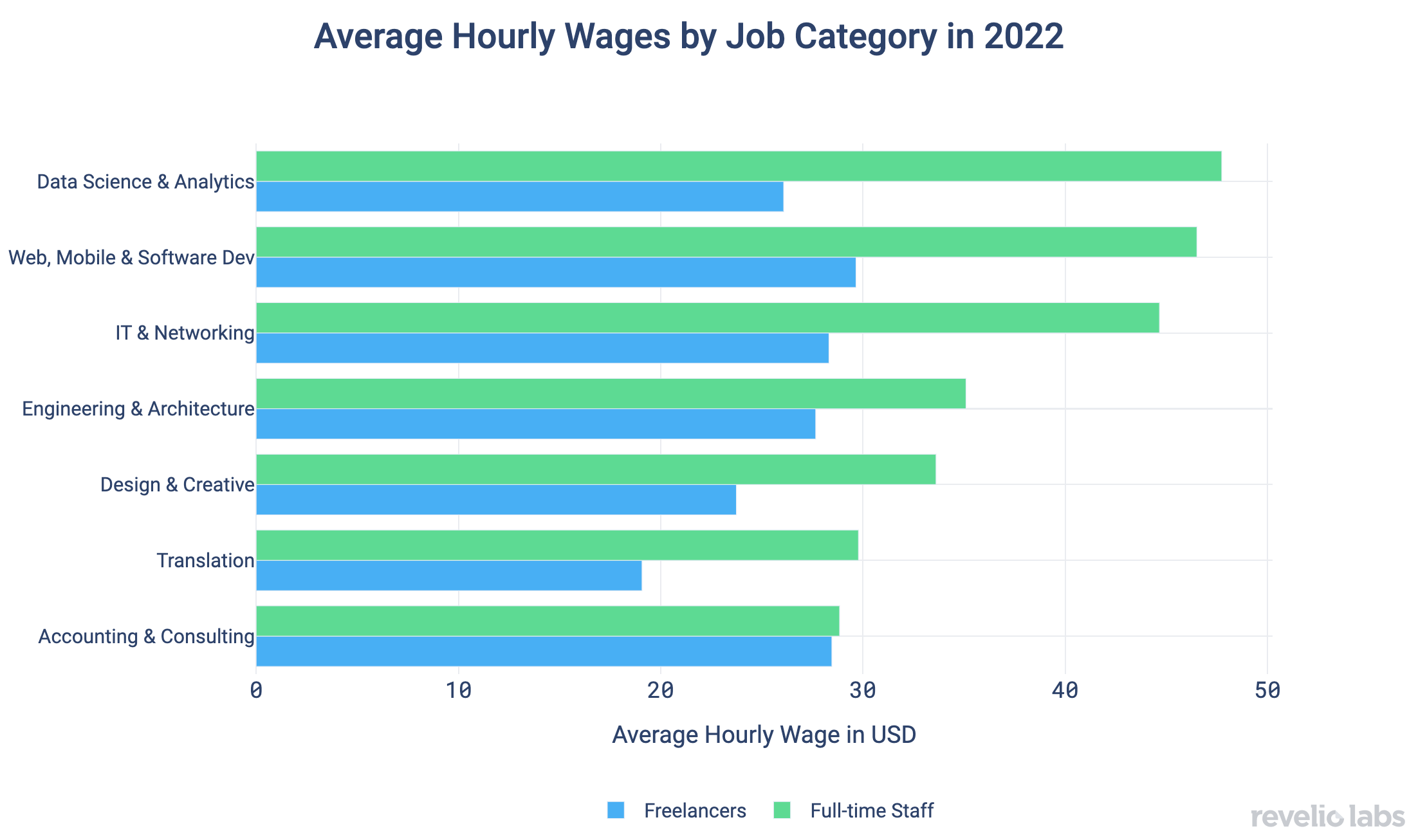 Remarkably, lower freelance wages don’t seem to impact their clients’ satisfaction detrimentally. We see that the job categories with the largest discounts are also the ones with the highest average ratings for freelancer jobs well done. 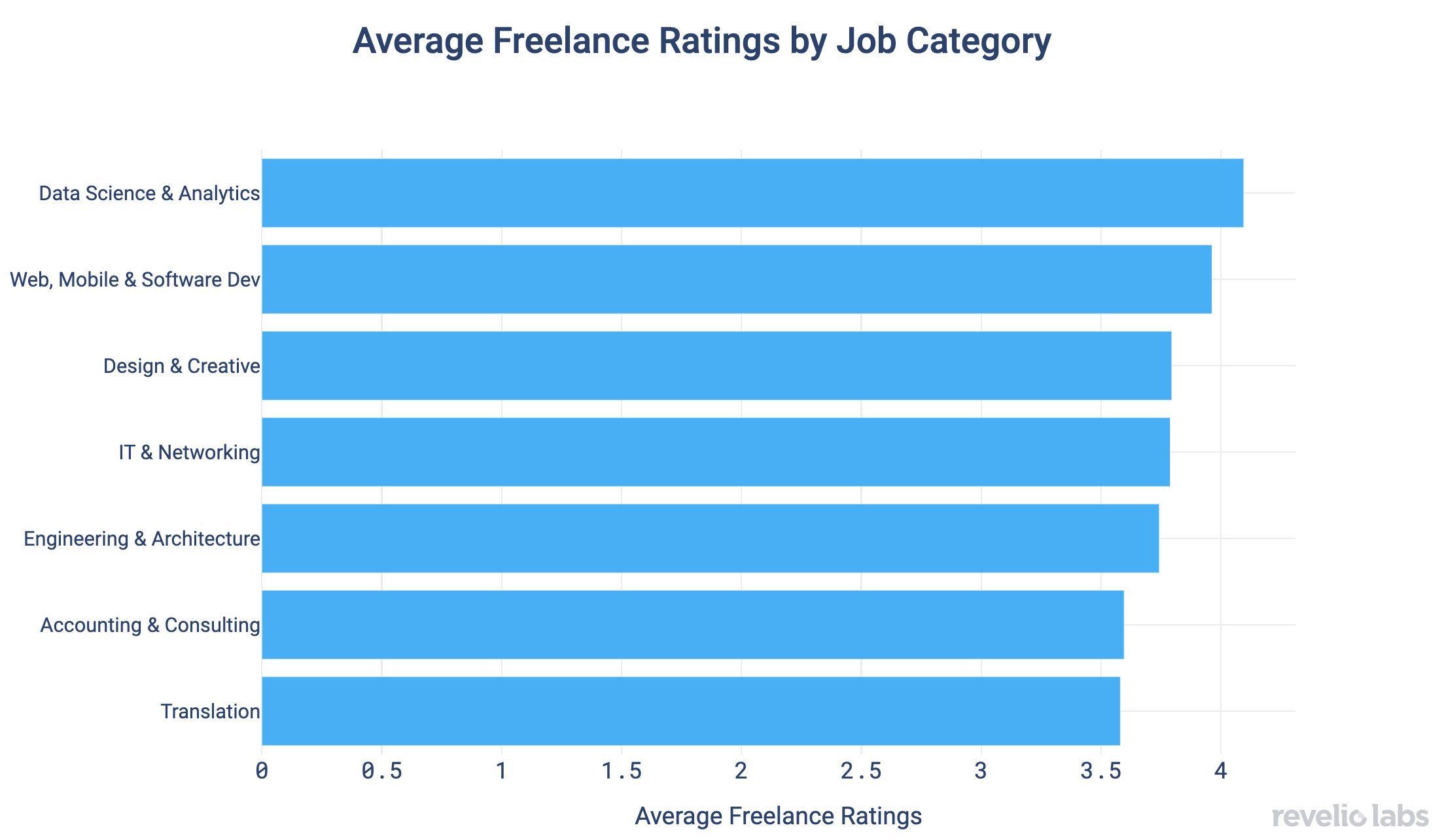